Posted from Diigo. The rest of my favorite links are here.
Posted by Julie Lindsay on Sunday, February 28, 2010 No comments:


Posted from Diigo. The rest of my favorite links are here.
Posted by Julie Lindsay on Sunday, February 21, 2010 1 comment:


Posted from Diigo. The rest of my favorite links are here.
Posted by Julie Lindsay on Sunday, February 14, 2010 No comments:


Posted from Diigo. The rest of my favorite links are here.
Posted by Julie Lindsay on Sunday, February 07, 2010 1 comment: 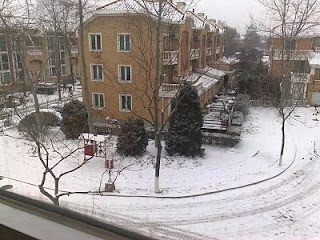 Snow again last night! A blanket of white to greet us this Sunday morning. Taking a few pictures before cars and feet and shovels destroy its serenity. Current temperature is -5 Celcius.
Posted by Julie Lindsay on Sunday, February 07, 2010 No comments:

The Flat Classroom Project 2010-1 is well under way. We have over 200 students from 10 classrooms across 6 different countries. The online Press Release provides more details.

So far, students have been connecting with their team members via the Flat Classroom Project Ning, and also starting to edit the collaborative wiki topic pages.

A special feature of every Flat Classroom Project is the addition of a keynote video that participants can watch, discuss and interact over. For FCP10-1 we are very excited to announce the Keynote, 'Pandora's Box: Fresh Start in a New World' has been delivered by Judy O'Connell, Head of Library and Information Services at St Joseph’s College, Hunters Hill in Sydney Australia. More information can be found on the Keynote wiki. I love the way Judy has made this video accessible to teenagers and encourages them to be proud of their status in the world as leaders of new ways to work and collaborate and show us all how to use emerging technologies and 'flat world' ideals to our advantage.
Thank you Judy!

Here are some guiding questions to get you thinking about how to respond and start a discussion or foster an existing discussion:

Award winning author, Don Tapscott, and award winning global collaborators Julie Lindsay and Vicki Davis (co founders of the Flat ClassroomTM Project) are excited to announce the 2010 NetGenEd Project, another global collaboration to envision the future of education and social action by inspiring today's students to study leading technology trends and create their vision for the future.

This is the second NetGenEd Project collaboration between the two organizations with the 2009 project announced at the Flat Classroom conference in Doha Qatar 2009. The 2009 Net Generation Education Project was the replacement for the Horizon Project and included 10 schools with more than 300 students. The application process is now open for schools who wish to participate in the project in March - May of 2010.

In this project, students will study and "mash up" the results of the 2010 Horizon Report from the New Media Consortium and Educause and Tapscott's book Grown Up Digital: How the Net Generation is Changing Your World. Students will study the current research and create wiki-reports with their student partners around the world analyzing current trends and projecting future happenings based upon this collaborative analysis. This project is managed by the students who assume roles such as project manager, assistant project manager, and editors of the various wikis.

After compiling their wiki reports based upon current research, and encouraged by "expert advisors" (subject matter experts in the industry), students will then create a video in one of two strands. Video strand I competition will be the NetGenEd Challenge where students are asked to envision the future of education based upon current global technological trends. Video Strand II Competition is the Macrowikinomics Challenge where students envision the future of global social action based upon their research in current global technological trends. The video challenge will be also be open to the public for submissions beginning March 1st.

"We are particularly excited about this year's project because we're not only asking students to envision the future of learning and the classroom but also how this media can be used to impact and improve society itself. This generation is the Net Generation and they are uniquely suited to speak for themselves in casting a vision for their own future," says project organizer, Vicki Davis.

This project is unique in that Tapscott will interact with students in forum posts throughout the project as they discuss Tapscott's research into NetGen and also current research as being compiled for Tapscott's forthcoming book (being written with Anthony Williams) MacroWikinomics. Additionally, he will keynote the project via a Youtube video released in March along with a student keynote to be recorded at the Flat ClassroomTM Mini-conference at ASB Unplugged in Mumbai, India in February.

Additionally, the Discovery Educator Network is going to host a series of webinars demonstrating how to tell a compelling digital story as well as leading a book club group for educators related to the NetGenEd project. The Flat Classroom Projects are global collaborative projects organized by Vicki Davis and Julie Lindsay and sponsored by Elluminate.

If you are ready to have your students collaborate globally and follow the best practices as used in the award winning Flat ClassroomTM, Horizon, and Digiteen projects fill out this form before February 9th and apply now!