#TeacherTuesday - Afghanistan: An Issue of Gender Equity the World Should Take Notice

#TeacherTuesday is an initiative of UNESCO to raise awareness of different education systems and challenges across the world.

The updated map below shows the teachers and countries we will be blogging about. 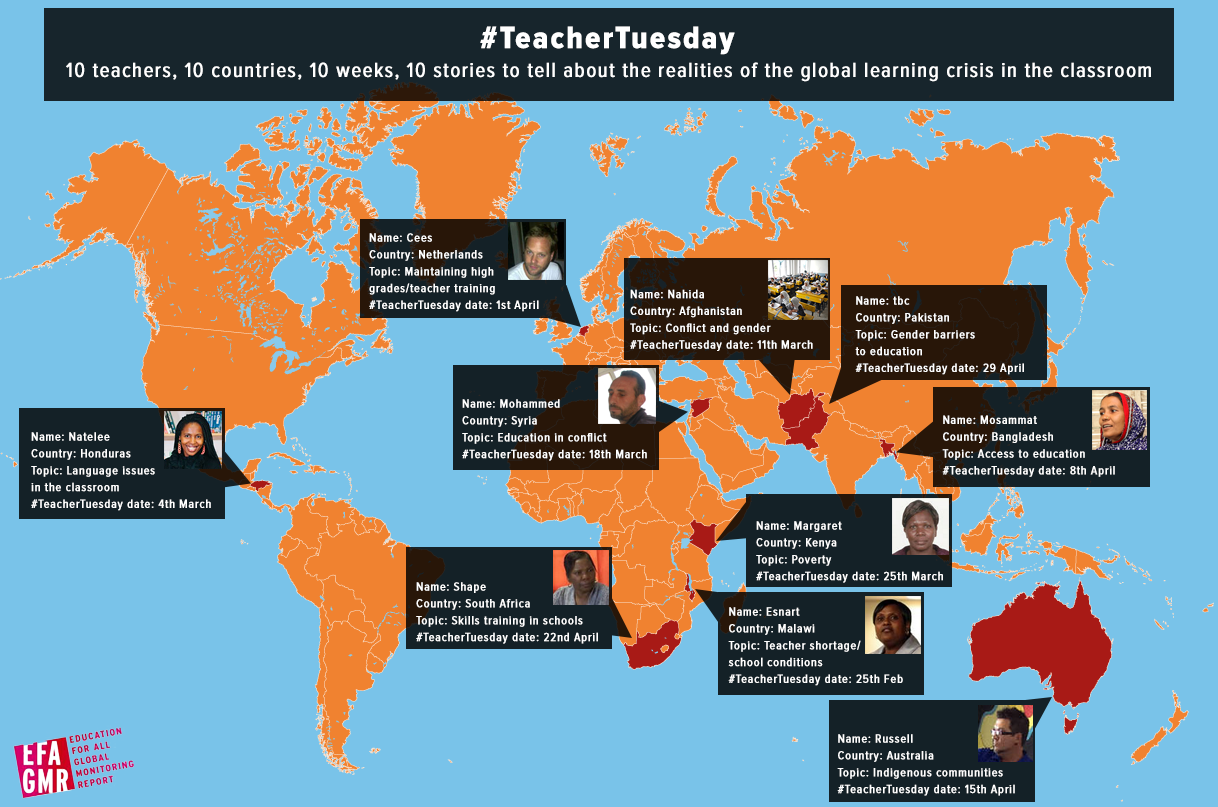 This week we focus on Afghanistan and a teacher named Nahida.

Despite improvements over the decade, Afghanistan has the highest level of gender disparity in primary education in the world with only 71 girls in primary school for every 100 boys. It is likely to remain very far from the target of gender parity in primary education by 2015.
No girls were in secondary school in 1999 in the country. By 2011, the female gross enrolment ratio rose to 34%, which meant there were only 55 girls in secondary school for every 100 boys. 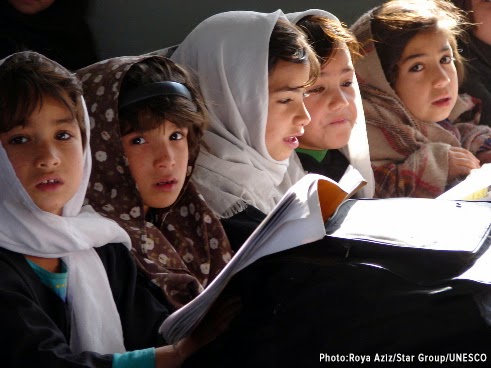 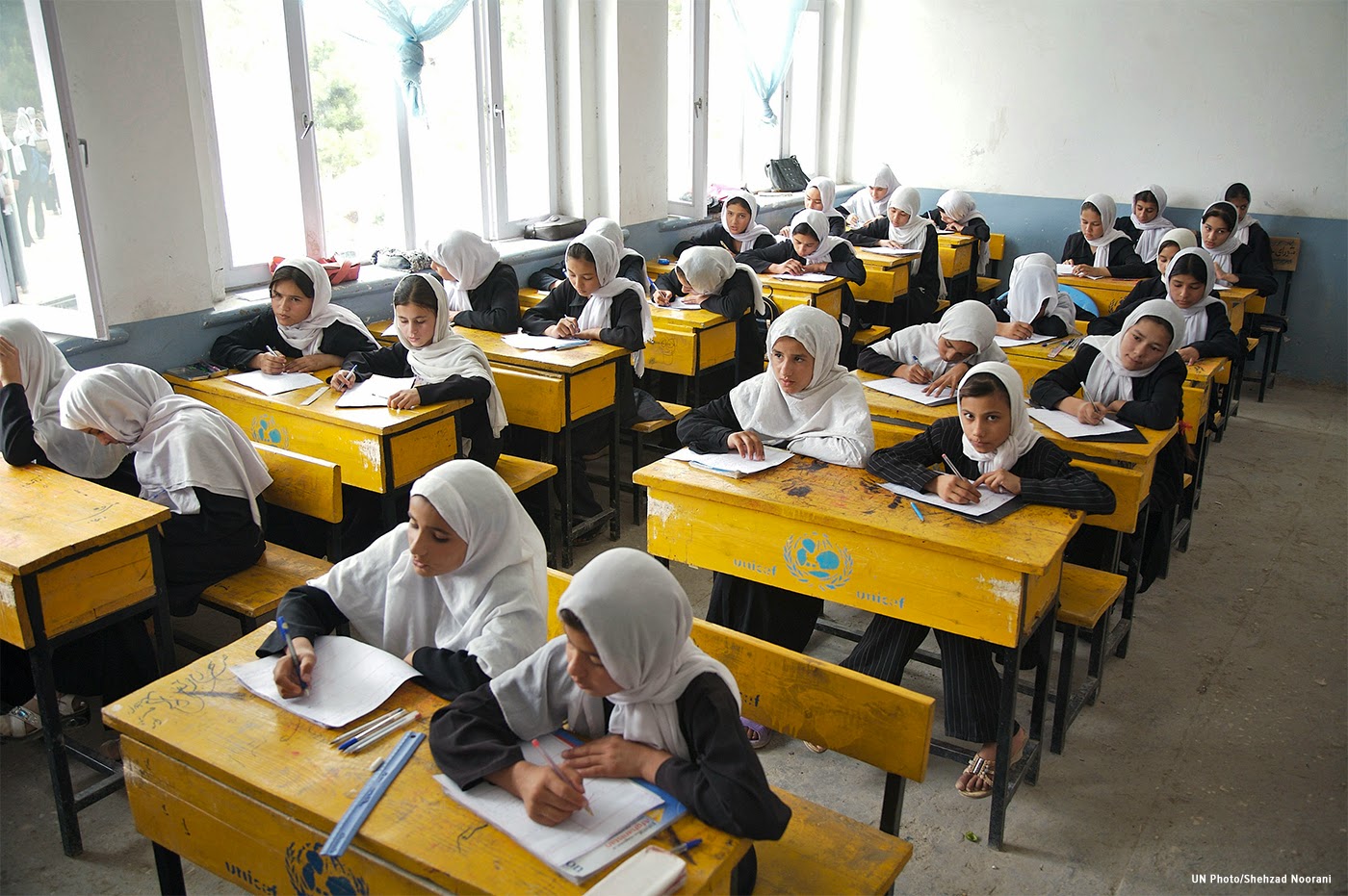 Details in the Gender Summary provided by the UNESCO EFA initiative show that over 100 million young women in low and lower middle income countries are unable to read a single sentence. And 31 million girls are out of school, with half of them unlikely ever to set foot inside a classroom. It provides FOUR main recommendations for supporting education for girls.
"The Gender Summary also demonstrates the importance of investing in girls’ and women’s education, not just for individuals but for the whole of society. Education reduces women’s poverty and boosts their chances of getting jobs that pay as well as men's. It has enormous benefits for women’s health, as well as their children’s, saving millions of lives through better knowledge of disease prevention and treatment. Education also empowers women to make better life choices, helping to avert early marriage and childbirth."  Source: Gender summary turns spotlight on girls' education.

Nahida graduated from Kabul university and became a teacher in 1989. She eventually became Principal of an all girl high school in Kabul - where there are more female teachers than in most areas. The school is supported by the French government, has 35-50 students in each class, and runs in 2 shifts each day. Nahida was supported by her government for a unique opportunity to travel to Japan, UK, Germany, South Korea, India and later to Pakistan for training.

Nahida has an important message contained in her story, so I am copying her exact words here:
"In the last period of time when Mujahidin came to power, different portions of Mujahidin started fighting in Kabul and other provinces. Schools closed because of security, especially girls schools. Schools become a target for Mujahidin.  Slowly when stability came to Afghanistan and Kabul for me it was priority to encourage girls and their families to come back to school.

I gave the message to their families and asked them to send their daughters to school again.
Also I made a council of elder people and religious people, and gave a message to them to help my school. Also I gave a message to the mosque because you know in Afghanistan, mosques help with all these things to encourage families and parents to send and to attend the female students to schools.
Also I asked different NGOs to support us especially getting uniforms for the girls and school books, and to support orphans and poor students. All of it was to encourage the families of the female students to send them to school.
When the Taliban came to power, it was their policy to close all the schools for females. For me, it was difficult to go to school to teach. When I went to my school, the principal of the school was a Mullah and he didn’t allow me to enter the school and asked me after that not to come to school.  But for the boys, school was open.  I was a teacher every day and I was sad for the girls. When I understood the policy of Taliban was not to allow girls and female teachers to go to school, I started a home school for girls because families and their parents asked me to teach their daughters. Families trust me because I was a well-known teacher in my school. I decided to continue my job and my responsibility for my people and my female students especially to help them. It was a very strict time. Very difficult. I was afraid. The home school was very secret, not official. In one day there were three shifts, two classes of 25 girls.
It was a very difficult situation because the Taliban was very strict in their rules.
The Taliban thought I ran a class for the holy Koran – a religious class but I taught not only the holy Koran, but also all the subjects that were in school – the complete school curriculum. I did not receive any salary for this.
Today it has changed. When the Taliban fell and under Karzai, everything changed. Schools opened for the girls and boys. I was the first female teacher who went back to my school and organized my school.
When I went to my school I can explain you how, what the condition was. The school was completely destroyed. The buildings had no windows, no doors. The surrounding wall of the building of our school was destroyed.
Schools didn’t have any chairs, tables, blackboard, chalk, totally no school materials because the school was a Taliban location.
When I went to my school first I cleaned the classes with the help of my female teachers and my labour. I made the surrounding wall in mud and stones. Fortunately I had taken all of the documents of the school and they were saved with me in my home. Once again I gave messages to their families, parents, mosque and asked families to send their daughters for attend school.


The girls came back slowly, slowly. I encouraged families, asked their parents to school, encouraged them, talked with them.  Also I sent my female teachers to their homes. I announced it in different mosques. Female teachers started coming back to school and I started my teaching, and female teachers started teaching again.
The government and thanks to the support of the international community, thousands more schools were built not only in Kabul but in different provinces, and destroyed schools were rebuilt, equipped schools with chairs, tables, good chairs, good tables.
Also more than 47, 48 different countries which are involved now in Afghanistan to support different schools in the country, in many provinces.
Now in Afghanistan, war continues every day. Here there are suicide attacks, bombs. The insecurity, and instability, is a big challenge for families, for our people, especially for girls attending the schools. You know, Afghanistan is a special country with special rules that must be followed by girls and women. When they want to go to school their parents are afraid about the lack of security, because suicide attacks happens, there are bombs and bad events in the city, many female students don’t come to school. For me as a director of this school, I have organized special transportation for my students. It’s a good solution to prevent absenteeism of girls from school.
It’s a big problem. You know when a bomb explosion happens in a city, how will the morale be of the students, especially female students? After each bad event that happens in our country, it has a very bad impact on their morale.
When a suicide attack happens, families don’t allow their girls to go to school for one or two days. Also for boys, but especially for girls.
In girls school it’s the rule the teacher has to be female. In my school, which I direct, of the 105 teachers, only 2% are male.
I only need three more female teachers for next year in my school, but in all Afghanistan it’s the big challenge for education, especially in the provinces for the girls’ schools. You’re faced with difficulties and challenges because of the lack of female teachers. Day by day the number of girls decreases especially in the high grades classes like 10, 11 and 12.
In the provinces especially in the unstable provinces like the south of Afghanistan the lack of the female teachers causes schools difficulties. Only in the big cities – the capital – we have in school a high number of female teachers. The Government and also the Ministry of Education are planning to do more to educate and hire female teachers, but it is hard to send teachers to the provinces because of lack of security.
It’s Afghan tradition and our religion doesn’t allow female teachers to go without their husbands anywhere. In provinces it is possible to recruit female teachers locally but in unstable provinces, the government is faced with difficulties recruiting. But in a stable province and in Kabul, we don’t have any problem about the job of female teachers.


It’s also a big problem especially for all of Afghan students who have graduated from schools and university to get a job as there is a lack of jobs. This decreased the number of students.
I am a realistic person and optimistic about our future of education and learning programmes in Afghanistan. Now our people, after three decades of war, completely know about the importance of education. People and families work hard and get money and spend more for their children to learn English, computers, to go to school. In fact they spend more investing in their children to go to school – like stationary, uniform.
In Afghanistan now there is big competition between Afghan families of knowledge and learning.  The families are lucky if their children go to school, if they learn more, graduate from high school and university, because now they know when a boy or a girl graduates from university he will be able to work not only in government, but with foreign NGOs and get a good salary. Good salaries can bring big change, fundamental change in their life. Because of that I am optimistic about the future of education in our country. One thing that is more important is that the international community support the future of education through our Government. Educated people don’t take guns and don’t destroy their country and their schools."


This blog post is a contribution to Week 3 of #TeacherTuesday, a UNESCO and EFA initiative.
I invite you to also read from my blog:

Email ThisBlogThis!Share to TwitterShare to FacebookShare to Pinterest
Tags: teachertuesday